Common Methods to Solve the Deformation of Aluminum Parts

Common Methods to Solve the Deformation of Aluminum Parts 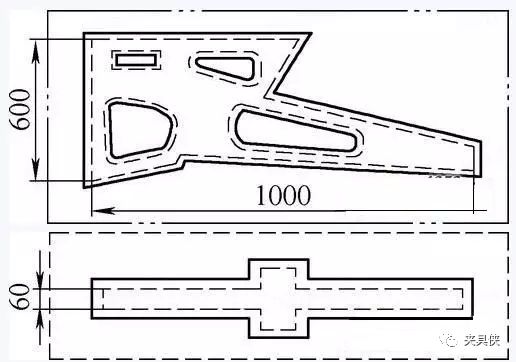 For example, Figure 1 shows a beam part, the blank is 60kg, and the part weighs only 3kg. If it is machined and formed at one time as shown by the dotted line in the figure, the flatness error can be as high as 14mm. If it is pre-processed according to the solid line in the figure, and then processed into the required parts after a period of natural aging, the flatness error can be reduced to 3mm.

Figure 2 shows the parts of a certain type of cap wearer, the local minimum thickness is only 3mm, and the blank thickness before processing is 20mm. The parts can be directly processed to size with the pressing plate on the machining center, but when they are removed from the workbench, the bottom ends of the parts will be upturned, causing serious over-tolerance or even scrapping.

Therefore, before processing, first open a stress relief groove on the blank, as shown in the solid line position in Figure 3, and then remove it from the workbench, natural aging for 1 to 2 hours, so that the deformation occurs as much as possible at this time. After that, a fitter leveling process is added to level the parts, and the amount of deformation of the parts in the subsequent processing will be greatly reduced.


2. Improve the cutting ability of the tool

The material and geometric parameters of the tool have an important influence on the cutting force and cutting heat. The correct selection of the tool is very important to reduce the deformation of the parts.

① Rake angle: Under the condition of maintaining the strength of the cutting edge, the rake angle should be appropriately selected to be larger. On the one hand, it can grind a sharp edge, and on the other hand, it can reduce cutting deformation ,chip removal more easily , thereby reducing cutting force and cutting temperature. Never use negative rake angle tools.

②Clear angle: The size of the relief angle has a direct effect on the wear of the flank surface and the quality of the machined surface. Cutting thickness is an important condition for selecting the relief angle. During rough milling, due to the large feed rate, heavy cutting load, and large heat generation, the tool requires good heat dissipation conditions. Therefore, the clearance angle should be selected smaller. When finishing milling, a sharp edge is required to reduce the friction between the flank face and the machined surface and reduce elastic deformation. Therefore, the relief angle should be selected larger.

③Helix angle: In order to make the milling smooth and reduce the milling force, the helix angle should be selected as large as possible.

④ Entering angle: Appropriately reducing the entering angle can improve the heat dissipation conditions and reduce the average temperature of the processing area.

②Fine grinding of the teeth. The roughness value of the cutting edge of the tooth should be less than Ra=0.4um. Before using a new knife, you should lightly grind the front and back of the teeth with a fine oil stone to eliminate the remaining burrs and slight serrations when sharpening the teeth. In this way, not only can the cutting heat be reduced, but also the cutting deformation is relatively small.

3. Improve the clamping method of the workpiece

For thin-walled aluminum workpieces with poor rigidity, the following clamping methods can be used to reduce deformation:

(1) For thin-walled bushing parts, if a three-jaw self-centering chuck or spring chuck is used to clamp from the radial direction, once it is released after processing, the workpiece will inevitably deform. At this time, the method of pressing the axial end face with better rigidity should be used. To locate the inner hole of the part, make a self-made threaded through mandrel, sleeve it into the inner hole of the part, press the end face with a cover plate on it, and back it with a nut. The clamping deformation can be avoided when the outer circle is processed, thereby obtaining satisfactory processing accuracy.

(2) When processing thin-walled and thin-plate workpieces, it is best to choose a vacuum chuck to obtain a uniformly distributed clamping force, and then process it with a smaller cutting amount, which can well prevent the workpiece from deforming.

(3) Use packing method. In order to increase the process rigidity of thin-walled workpieces, medium can be filled inside the workpiece to reduce the deformation of the workpiece during clamping and cutting. For example, pour a urea melt containing 3% to 6% potassium nitrate into the workpiece, and after processing, immerse the workpiece in water or alcohol to dissolve the filler and pour it out.

During high-speed cutting, due to the large machining allowance and intermittent cutting, the milling process often produces vibration, which affects the machining accuracy and surface roughness. Therefore, the CNC high-speed cutting process can generally be divided into: rough machining-semi-finish machining-clear corner machining-finishing and other processes. For parts with high precision requirements, it is sometimes necessary to perform secondary semi-finishing and then finishing. After rough machining, the parts can be cooled naturally to eliminate internal stress caused by rough machining and reduce deformation. The margin left after rough machining should be greater than the amount of deformation, generally 1 to 2 mm. During finishing, the finishing surface of the part should maintain a uniform machining allowance, generally 0.2-0.5mm is appropriate, so that the tool is in a stable state during the machining process, which can greatly reduce cutting deformation, obtain good surface machining quality, and ensure The accuracy of the product.

In addition to improving tool performance and pre-aging treatment to eliminate the internal stress of the material, in actual operation, the use of appropriate operating methods can effectively avoid material deformation.

For parts with large machining allowances, in order to have better heat dissipation conditions during processing and avoid heat concentration, symmetrical processing should be used during processing. If there is a 90mm thick sheet that needs to be machined to 60mm, if one side is milled and the other side is milled immediately, and the final size is processed once, the flatness will reach 5mm; if repeated feed symmetrical processing is used, each side is processed twice The final size can guarantee a flatness of 0.3mm.

If there are multiple cavities on the plate part, as shown in the figure below. When processing, it is not advisable to use a cavity-by-cavity sequential processing method, which is easy to cause uneven stress and deformation of the parts. Multi-layer processing is adopted, and each layer is processed to all cavities at the same time as much as possible, and then the next layer is processed to make the parts evenly stressed and reduce deformation.

Reduce cutting force and cutting heat by changing the cutting amount. Among the three elements of cutting amount, the amount of back-cutting has a great influence on cutting force. If the machining allowance is too large, the cutting force of one pass is too large, which will not only deform the parts, but also affect the rigidity of the machine tool spindle and reduce the durability of the tool. If you reduce the amount of knives back, the production efficiency will be greatly reduced. However, high-speed milling in CNC machining can overcome this problem. While reducing the amount of back-grabbing, as long as the feed is increased correspondingly and the speed of the machine tool is increased, the cutting force can be reduced while ensuring the processing efficiency.

4. Pay attention to the order of the knife

Rough machining and finishing should use different cutting sequences. Rough machining emphasizes the improvement of machining efficiency and the pursuit of removal rate per unit time. Generally, upside milling can be used. That is, the excess material on the surface of the blank is removed at the fastest speed and the shortest time, and the geometric contour required for finishing is basically formed. The emphasis of finishing is high precision and high quality, and down milling should be used. Because the cutting thickness of the cutter teeth gradually decreases from the maximum to zero during down milling, the degree of work hardening is greatly reduced, and at the same time the degree of deformation of the parts is reduced.

When machining parts with cavities, try not to allow the milling cutter to plunge directly into the part like a drill bit, resulting in insufficient chip space for the milling cutter and unsmooth chip removal, causing the parts to overheat, expand, and collapse. Unfavorable phenomena such as broken knife. First, drill the hole with a drill of the same size as the milling cutter or one size larger, and then mill with the milling cutter. Alternatively, the CAM software can be used to produce the spiral cutting program.

PREVIOUS：What is the CNC Machining Center No next